It has been 7 months since my last blog post and so I thought I would provide an update. In 3 days’ time it will be exactly one year since my daughter Anna starting under Dr Aron’s regime for treating atopic eczema. If you are new to this blog and you want to start at the beginning then here is a link: https://annaanddraron.wordpress.com/2014/07/12/part-1/

Anna is now using Dr Aron’s cream for maintenance all over her body once every 7 days (and more often on small patches of eczema that appear from time to time on her lower arms and hands). We don’t even moisturise her in between. Parents of eczema sufferers, whether under Dr Aron’s regime or not, will appreciate that it is a dream to be applying creams so infrequently. I hate applying creams. There are all sorts of semi-unpleasant things I would rather do (eg. housework!). But at once a week I really can’t complain.

Anna’s cream is unchanged since she started a year ago and still contains the same mix of steroid, antibiotic and moisturiser creams, with the amount of moisturiser being 13 times the amount of steroid (unlucky for some but lucky for us!). With her next pot of cream, which we’ll start in a few weeks, we’re going to remove the antibiotic element and see how that goes.

Dr Aron is always the first to stress that his regime is not a cure but a way of managing eczema. Anna still has eczema, albeit it (thankfully) does not show itself very often or very badly. We work hard at keeping her skin eczema free – trying not to let her get too hot or sweaty, giving her a healthy diet (and avoiding too much sugar, preservatives and E-numbers), obviously avoiding all of the foods that she is allergic to, stopping her rolling around on grass or on carpets, keeping her away from animals, being constantly vigilant of the condition of her skin. It is worth the hard work; complacency and eczema do not go well together.

Before Anna started under Dr Aron’s care, she was itchy what seemed like ALL the time. A week into Dr Aron’s care, the itch had completely disappeared. This was when we were applying the cream four times a day. A year down the line and with hardly any cream being applied, Anna does get itchy sometimes and maybe one or two nights a week we’ll put her in scratch sleeves overnight (‘just in case’). But it’s a fraction of what she experienced before. Eg. we never feel the need to give her an antihistamine whereas she used to take one daily.

It’s easy to get used to this new way of life and forget how hard things used to be. The other day I came across this video I took of Anna the week before she started with Dr Aron:

Unhappy memories, but it shows how far Anna has come. The video was taken when we were on holiday in York last summer. It was during that holiday that we signed up with Dr Aron. I couldn’t wait to get home to get started. This year, we are back in York (right now) and it seems almost fitting that Anna is having her Dr Aron “anniversary” here.

To close this section, here are a couple of photos – one of Anna in a costume that I wouldn’t have dreamt of putting her in before Dr Aron and the other of the thank you card Anna made for Dr Anna last year (the card look literally months to get from the UK to South Africa but it made it in the end). 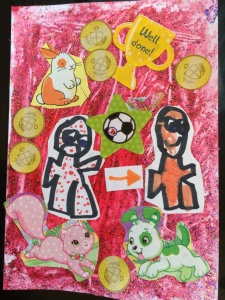 2. Growth in the Aron regime

When Anna started with Dr Aron a year ago, I knew of about 10 existing patients and there were about 100 people in the ‘Dr Aron Eczema Treatment Discussion Group’ on Facebook https://www.facebook.com/groups/draron/. Today, there are over 4000 members of the Facebook group and I could name literally hundreds of patients. The growth has been phenomenal and it shows the power of the social media (Facebook at its best) and ‘word of mouth’.

Here is the Facebook cover page, with photos of some of Dr Aron’s patients:

Here is a map showing the locations of just some of Dr Aron’s patients in the UK:

And that is just the UK! Dr Aron has hundreds of new patients all around the world and, in particular, in the US, Canada, South Africa, Australia and New Zealand.

Dr Aron is so busy that he has had to close to new patients for a couple of months, until 21 July 2015. If you’re interested in signing up then you can register now and ‘join the queue’. See his website http://www.draron.com.

I’m part of a campaign group that is working to encourage research into the Aron regime and for Dr Aron’s method to be adopted more widely. Things are happening, albeit it will be a slow journey. The latest exciting development is that a top dermatologist in the US, Dr Peter Lio, has taken an interest in the Aron regime and has invited Dr Aron to Chicago in September: https://m.facebook.com/story.php?story_fbid=763079423800978&id=269151596527099

Dr Lio is a member of the the National Eczema Association (NEA) Scientific Advisory Committee in the US. I am hopeful that the NEA will be open-minded about the Aron regime. Things are more challenging in the UK, where we have the NICE guidelines (SIGN in Scotland where I live), which dermatologists do not like to deviate from. I wrote to the National Eczema Society (NES) in the UK (three times!) and they finally replied and told me that “topical steroids and antibiotics should be used in short bursts for flares and infections”. Dr Aron’s method, which uses steroids and antibiotics continuously for a period of months but gradually tapering off, produces far superior results and yet the NES will not consider what goes against the standard practice in the UK. What I want is for research to be done into the effectiveness and safety of the Aron regime so that the NICE/SIGN guidelines can be updated.

As a closing note, this has all had a huge (and positive) impact on my life in the last year plus kept me very busy and helped me learn new skills. But one of the nicest things to have come out of it is the friends I have made along the way 😊